The collector resides in Maryland and first became interested in coins at age 10 (1967).  For the past 37 years, he has been working for NASA Goddard Space Flight Center doing scientific programming, analysis, and research relating to climate studies utilizing Earth-observing satellites. Other areas of interest include astronomy and space exploration, cosmology (origins of the universe), meteorology (severe weather and extreme winter weather), and finally, website & graphic design.

Hurricane Maysak, a Category 5 storm, as seen from the ISS in 2015

I was born in 1957, the year the Sputnik satellite was launched.  Looking back at it now, this seems a watershed event foretelling the influence that advancing science, technology, and even the new frontier of space exploration was to have on my life.

Still, life in the United States in the late 1950’s and early 1960’s seems somewhat simple and tame by today’s standards.  Television was gaining traction and was becoming the center of almost every home.  Family hour with everyone huddled around their TV sets in the evening was a commonplace occurrence.

The shocking assassination of President John F. Kennedy in November 1963 seems to me now to have signified some sort of transformative boundary that ushered in a new explosive era marked by change and upheaval.  When people speak of the 1960’s as an era, I think of that era as starting in 1964.  The Beatles burst onto the American scene in February of that year, and over the next few years new musical frontiers were broached and the unbridled empowerment and enthusiasm of American youth was really starting to gain a firm hold and shape our future. 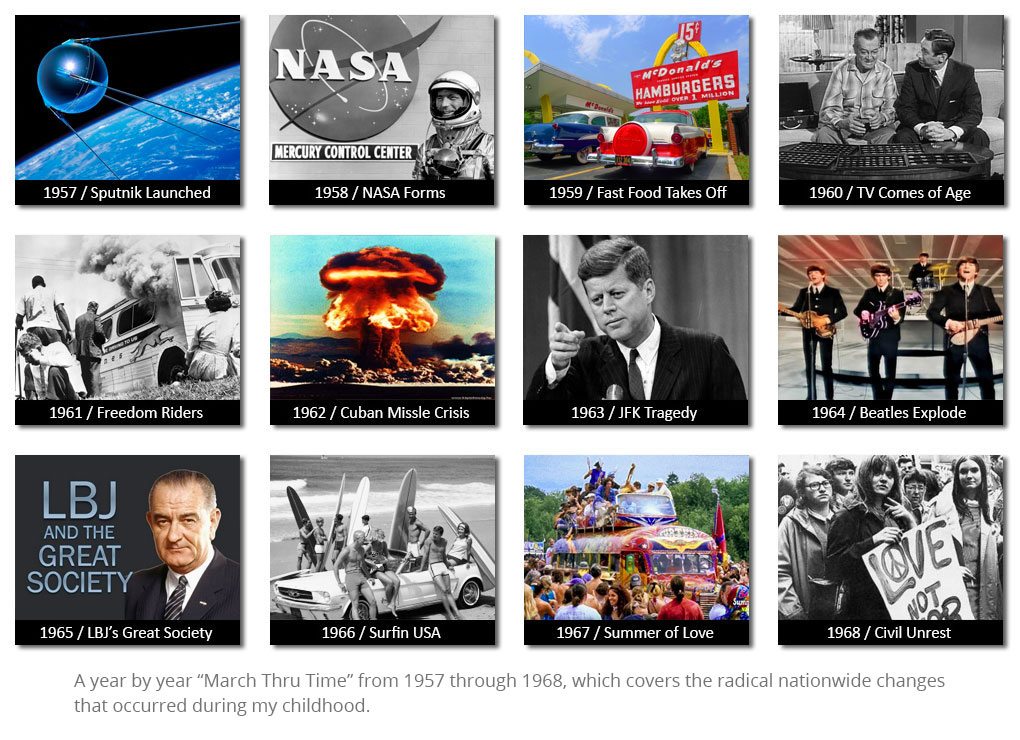 By the late 1960’s the whole country seemed to be impacted by a massive social revolution.  In the spring of 1968, the Rev. Dr. Martin Luther King and Presidential Candidate Robert Kennedy were assassinated.  The peace movement and war protests continued to grow as more Americans turned against the ongoing conflict in Vietnam.  Riots spurred by the civil rights movement occurred in a number of major cities in America.  The music industry was dominated by The Beatles and The Rolling Stones.  Fashion flirted with see-through-blouses, mini skirts, and go-go boots.

Some average national prices of common items in 1968: a new house $15,000, a new car $2,800, a gallon of gas 34 cents.  Average wages in the U.S. were $7,850 annually.  It’s amazing to look back on that era and acknowledge how different it was from the world today.  One other dramatic transition was we, as a nation, lost our “hard money”  — as 90% silver dimes, quarters, and half dollars ceased production in 1965 — and 40% silver half dollars ceased production in 1971.  It was in this later part of the 1960’s, a time of massive upheaval, when I first became interested in coins.